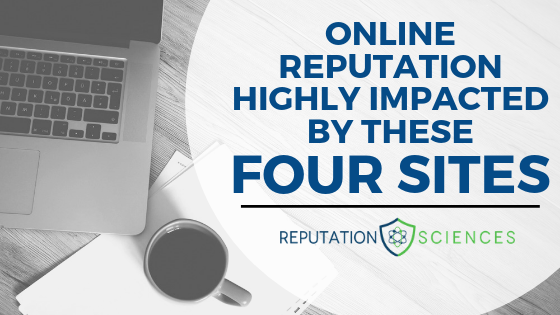 by RepSci
in online reputation
Comments

The Internet has become the wild, wild west of data. Legal notices, blog plots, gossip columns, news stories, company and employee reviews, social media and everything in between work to create a picture of who we are. It’s how consumers develop a perception of us. Even the tiniest bits of data come together to form a mosaic of your company and individual executives.

Author Tyler Collins emphasized to Forbes the importance of maintaining a positive online reputation this way:

“Having community driven content such as positive reviews, media coverage and customer testimonials are what will build the trust necessary for consumers to make a purchase decision.”

From buying decisions to hiring decisions to voting decisions, people are making choices based on what they find online. Couple that with the fact that the amount of personal data available is growing exponentially. From finding a date to buying a house to watching a movie, we are conducting almost all of our personal and professional business online, leaving a substantial data trail.

Technology has made reputation management a challenge for companies and individuals. It can no longer be an afterthought. A proactive approach is necessary.

What’s the best way to check up on your online reputation? The most basic answer is to “Google” yourself. However, you are spread thinner than you think online. There are numerous websites containing your personal data that may not show up on Google but are definitely available to the public.

Just how much personal data is out there? Currently, the world is producing 2.5 quintillion bytes of data every day. That’s 2.5 with 18 zeros after it. Even more shocking is that 90 percent of that data has been generated just in the last two years. Consider some other stats gathered by Forbes.

Add to those stats that five new Facebook profiles pop up every second. Each day 95 million photos and videos show up on Instagram, and 100 million people use Instagram “stories.” If you’re still unsure what is floating around the Internet about you, consider these four websites hurting your online reputation without you knowing.

There is an array of dating sites and apps available. Let’s take a look at one that seems safe for the individual that wants to protect his or her online reputation. With its 50 million users and expected annual revenue of $800 million, Tinder has become a leading dating app.

While it sometimes gets the reputation as a “hook-up” app, millions of adults use it to legitimately look for their soulmate. In fact, research from Psychology Today found that “using Tinder to find love outweighed the motivation to use it for casual sex.” Its popular “swipe-left/swipe-right” design is being mimicked by even non-dating sites, such as “Ripple,” a professional networking app backed by Match.com.

Why it is so popular?

It’s anonymous, requires minimal personal data and is generally seen as safe. However, Tinder and similar sites can still impact your online reputation. How so? If anonymity disappears, anyone can access your information, misconstruing an innocent connection as something more immoral. A tarnished reputation can lead to lost business deals, loss of a new job or promotion, or even damaging your personal relationships.

One of the main reasons Tinder is so popular is because it’s quick and easy to set up. The app does not require you to complete a lengthy questionnaire. Users must log in with Facebook, and most of the matching data is gathered from there. Here are four ways the Facebook connection leaves you vulnerable.

How does Tinder leave you vulnerable?

Tinder may not house your personal info. However, it brings in personal information from Facebook. This could easily identify who you are, canceling the anonymity of Tinder. Identifying yourself on these so-called anonymous sites means opening yourself up to reputation issues.  People often include personal and business websites, other social media platform addresses, YouTube channels, and even their home phone number on their Facebook profile. All these items can reveal your Tinder identity.

Tinder pulls images from Facebook’s public image folder. If you are clearly identifiable, there goes your anonymity. The location of the photo can also identify you. Is it in front of your home, office or recognizable landmark?

Tinder looks at Facebook “friends” that users may have in common and lists them in the user’s profile. While this lends a bit of credibility to the Tinder user, it also makes identification easy. Facebook friends can easily search their connections, looking for the first name from the Tinder profile. With a name and an identifiable photo, anonymity is gone.

Tinder also shares the Facebook Groups its users have in common. A person can easily look through those groups to identify the user.

Clearly, sites with anonymous or hidden profiles are not truly secret. Even though Google might not find a Tinder profile, an eager ex-employee, ex-girlfriend or disgruntled customer can easily uncover a hidden profile.

What anonymous profiles do you have lingering online? Are you skeptical that people would go through so much trouble to find you? Consider this.Seventy-five percent of HR departments research candidates before hiring them. There are plenty of easy tips for researching their recruits. Here’s just one blog entitled, “5 Social Media Hacks to Track Down More Information When Hiring.” You don’t have to be an IT genius, or even have hacker skills, to dig beyond Google.

We’d like to assume what we watch in the privacy of our own home is just that—private. Although few of us read through all our privacy policies, we do expect that when a company has one, our data is safe. However, that is not the case for two reasons:

The online streaming service shared supposedly anonymous information of about 500,000 users as part of a $1 million contest to improve its recommendation algorithm. More than 50,000 contestants received two data-sets that included 100 million movie ratings, the date of the rating, a unique subscriber ID number, and the name of the movie they rated.

Does it matter if everyone knows what movies you like?

It wasn’t long before two University of Texas contestants identified several users by comparing the Netflix data to reviews posted on the Internet Movie Database website. What’s the harm in revealing moving ratings? It reveals personal preferences, such as sexual orientation, political leanings or even diet choices.

Netflix’s action led to a lawsuit by a Lesbian mom who said making her sexual orientation public “would negatively affect her ability to pursue her livelihood and support her family and would hinder her and her children’s ability to live peaceful lives.” The class action suit also argued that marketers will get the data, and group consumers into certain categories based on their movie ratings.

Is it really that big of a deal?

Paul Ohm, a University of Colorado law professor and former Justice Department lawyer, was featured in Wired. He recently authored a legal paper that questions anonymizing data, essentially saying that “if data is useful to researchers, it could also, by definition, be re-identified.”

Have you published reviews, comments or criticisms that were supposedly anonymous? Those personal viewpoints are publicly accessible for anyone to build a mosaic of your online reputation.

The online auction giant had 6.7 million sellers last year and sold products in over 190 markets around the world. Most people fear the release of financial data when they hear about a security breach. That’s why users were thankful in 2014 when Ebay’s breach only involved basic info, such as addresses, passwords and email addresses.

However, Ebay is storing valuable data that can tarnish your online reputation. In a sense, any small business owner selling product on Ebay must work to maintain a high Ebay reputation or rating. However, reputations can reach beyond the Ebay platform. Let’s look at one scenario.

Consider the example of Sharon, a vice president at a Fortune 500 company. She uses Ebay simply to purchase personal items. Her company has no association with the platform at all. Ebay would not come up in a Google search of her business or her name.

How could the data stored by Ebay negatively affect her reputation?

Let’s see. That breach we mentioned in 2014 did include passwords. So, Sharon’s account could easily be accessed—no hacking necessary.

Now, Sharon’s competitors, disgruntled former employees or maybe even an ex-boyfriend can now view her buying history, comments, ratings and communication between Sharon and her buyers. Imagine it’s the former employee that has accessed her account and is now reading her communication.

A year ago Sharon bought a Coach bag that turned out to be a fake. She contacted the seller with her discovery. When the seller denied that his product was not original and refused to refund Sharon’s money, she got upset. She sent a pretty scathing email, including profanities, to the seller. While Sharon’s anger was justified, her reaction was in poor judgment. She eventually resolved the issue through Ebay and forgot about it.

How do her private online interactions affect her career?

One year later, Sharon is in the running for the CEO position at her company. Her disgruntled ex-employee thinks she should not have this position. So, he goes to work to dig up any discrediting information. He finds Sharon’s profanity-laced communication. Combined with data from her Netflix account that reveals strong political leanings, and some photos on her Facebook account that don’t build a positive image, the executive committee decides to go with another candidate.

Ebay is just one example of sites that store data that seems insignificant. However, combined with other data, it can build a picture of who we are. Do you know what data is out there contributing to your personal mosaic?

Every city, state, and county keeps detailed records of your property and vehicles. With the touch of a button, individuals can access years of public data about your movements and actions. How could these records affect your online reputation? Let’s say Sharon’s executive committee was still on the fence about her CEO promotion, even after the revelations from her ex-employee. The executive committee knows the reputation of their leadership is critical to the company’s reputation. So, HR begins to dig deeper. Unfortunately, Sharon’s public records indicate that she has two liens against her home and is behind on her city property taxes.

How do personal finances affect her ability to perform her job?

While there might be a legitimate reason for Sharon’s poor financial situation, the delinquent property taxes might indicate that she’s either irresponsible, unorganized or just doesn’t honor her commitments. As CEO, the company’s CFO would report to her. How can she oversee the organization’s finances if she can’t manage her own? These factors add a little more to Sharon’s mosaic, and the executive committee goes with another candidate. What do public records reveal about your personal life?

How Hackers Use Your Data

In addition to disgruntled people using your data against you, there’s a whole world of hackers looking to harvest data. What do they do with massive amounts of data?

While most of the time we create our online reputation through our own online activities, the dark world of hackers has added a new dimension to reputation management. An impostor may have built pieces of your mosaic. In today’s world of identity theft, hacking and intentional online sabotage, companies, and individuals must diligently monitor their online reputation. Go beyond Googling yourself. Dig deeper. Where are you leaving pieces of your mosaic? What are the websites hurting your online reputation without you knowing? Let the experts at Reputation Sciences™ help you find out. Contact us to learn more.